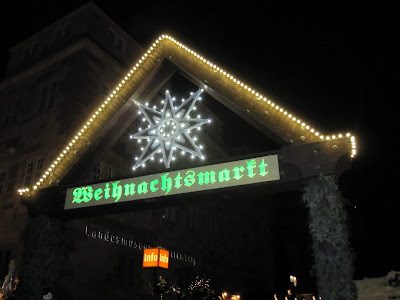 I love being in Germany for the Christmas season. One of the highlights of this season is the proliferation of Christmas markets. Nearly every town has a market around the town-square. Sometimes they're only open for a week or one weekend, sometimes for the entire month of December until the day before Christmas Eve. Around here it's called a Weihnachtsmarkt, but to the East in Bavaria, they call them Christkindlmarkt or Christkindlesmarkt. At such a market, you'll usually see a number of booths selling assorted hand-made goods like candles, knitted winter-wear or soap.

Christmas markets are not just a place to get some Christmas shopping done. There are also grill-huts where you can get various types of Bratwurst or Schupfnudeln mit Sauerkraut, not to mention, Glühwein, which spiced red or white wine served hot. Interspersed among these booths are nut-roasting trailers. Those are my favorite because they always smell really good! They roast all kinds of nuts and coat them in a thick layer of pure sugar. They also usually sell ginger-bread hearts with little notes written in icing. 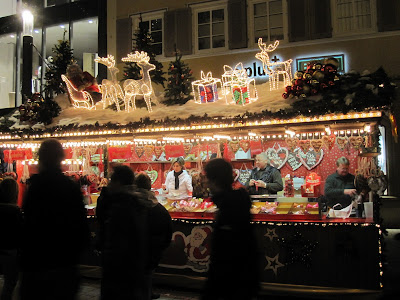 People will often make an evening of it: chat over a sausage and Glühwein then browse through the various stands and maybe even go for a round of ice skating. There's also usually a nativity scene somewhere at the market. Reutlingen even has a couple of live sheep! Here's a short video I made at the Reutlingen market just last week. This band-stand is in the middle of the market. Before this group, there was a brass ensemble that played some traditional Christmas hymns.


I know there's a large Christmas market in Chicago, but I think in general, we're missing out on this in America. I think that's mostly because Germany (most of Europe, really) is a very pedestrian-friendly society. It's a lot easier to set up a walk-through, outdoor market when there's a large part of town dedicated to pedestrian traffic. This is the case in pretty much every German town I've been in. Towns around here that were founded in the middle ages (or earlier) are laid-out a lot differently than towns in the US that were first settled in the 1800s.

Subscribe via email to receive blog updates in your inbox

Click this link if you would prefer to use a feed reader to get updates on my blog.